Jimmy Carter at the White House…What could possibly go wrong???

Jimmy Carter took time out of his busy schedule of helping Islamic Terrorists kill Jews to visit President Barack Hussein Obama and kiss the ring of the Moonbat Messiah.

Former President Jimmy Carter was seen at the White House this morning, where he spent about 90 minutes in the West Wing – most of it with National Security Adviser Jim Jones, reports CBS News White House correspondent Mark Knoller.
Mr. Carter’s press secretary said Carter received a "private briefing … as he has had with past administrations."
The White House added that President Obama briefly greeted Mr. Carter during the visit, reports Knoller.

Perhaps he wanted to congratulate  Obama on his $101,332 bonus from AIG in the form of political contributions.

I can picture Obama and Carter having a pissing contest to see just who is the biggest failure….”I am. No, I am. No really, I am……”

One can only imagine the advise Jimmy can give on issues such as the Economy, National Security, Foreign Relations…..The possibilities are endless!  Lord knows Carter set the bar pretty high in the field of FAILURE, but I have faith in the Obamessiah that he can surpass Carter and Fail in Epic Proportions.

I couldn’t help myself and had to have a little fun with the picture of Jimmah lurking around the Whitehouse. 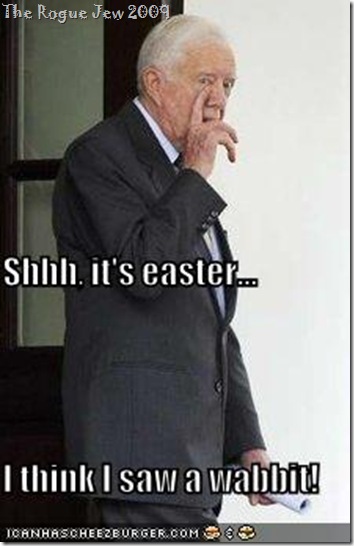