The former Marine turned Congressman who chose to align himself with our enemies and dishonored the uniform he once wore by slandering the fine men who wear it today Jihad Jack Murtha has died. 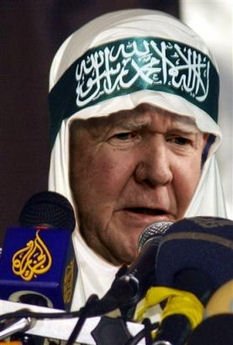 From Associated With Terrorists Press:

A spokesman says Democratic Rep. John Murtha of Pennsylvania, a retired Marine Corps officer who became an outspoken critic of the Iraq war, has died. He was 77.

He had been suffering complications from gallbladder surgery.

In 1974, Murtha became the first combat veteran of the Vietnam War elected to Congress. He wielded considerable clout for two decades as a leader of the House subcommittee that oversees Pentagon spending. But frustration over the Iraq war led him to call for an immediate pullout of U.S. troops in 2005.

Murtha’s congressional career was clouded by questions about his ethics—from the Abscam corruption probe in 1980 to more recent investigations into the special-interest spending known as earmarks and the raising of cash for election campaigns.

My mom always told me that if you can’t say something nice about someone, then don’t say anything at all…In most cases, especially when dealing with the retards of the left, I am more then happy to ignore my mom’s advice…In this case, I will honor my mom’s advice and keep my comments to my self.  I think Hashem will deal with Murtha and it’s not my place to wish anything bad upon him or his family.