Granted, George W. Bush was not the most gifted speaker in the world but as we have come to learn, Dubya was better off the cuff speaker then the Obamessiah and has proven himself incompetent and inept when without it.

Reflections from the hard drive of the machine that enables the voice of the Leader of the Free World. 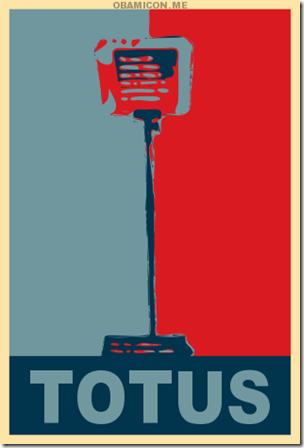 We’ve heard over and over and over again what a brilliant speaker the Obamessiah is.  Fact is, he speaks well when it is prewritten, and prepared by someone else and is scripted for him and broadcasted to the screen before him.  Pull back the curtain and you’ll find the likes of George Soros pulling Obama’s strings and feeding him his lines.

Could you have imagined Obama trying to speak to America as President Bush did after 9-11 with that bullhorn and without his trusty teleprompter?  He would have referred to the NYC Firemen as waterheads and bumbled through how we need to understand the needs and feelings of the Islamic Terrorists who committed those horrible acts.  Does Obama have my confidence?  Absolutely not.

Watching Obama speak without his teleprompter is like watching the special olympics!

I couldn’t help but have a little fun at the expense of our , er, uh, uh, er,  President. 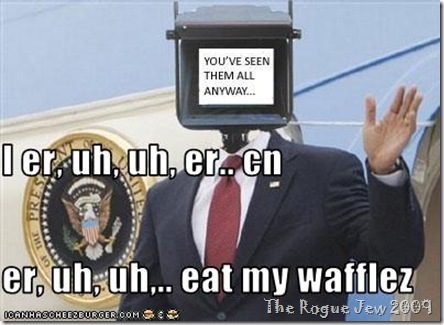 From Afghanistan Shrugged: I shoot you because I care

Over time I’ve received emails and comments on this blog that I’m insensitive to your culture. Evidently, I should endeavor to be more tolerant and politically correct in my quest to kill you with every means at my disposal.

After much self reflection I’ve seen the error in my ways and thought I’d write you a brief note to apologize for my actions and those of my compatriots in Team Vampire. I now see how my attempts to incinerate, ventilate and generally cause mayhem could possible hurt your feelings and offend your sensibilities. For that I apologize.

First, let me complement you on the bunker complex that we saw the other day. It seemed very nice and looked like you’d chosen wisely on the size. It appears to me that you didn’t overextend yourself financially building it. That’s great! I also hope that you didn’t use a subprime lender or an adjustable rate mortgage. This should alleviate any issues in the future about defaulting; having to walk away from the bunker complex.

The downside is that you selected this outstanding piece of real estate to launch rockets at American and Afghan soldiers. Thus, I had to destroy it. Maybe we should have served you with a notice to vacate but that didn’t seem prudent at the time. Really if you want to blame someone it should be the Air Force as they’re the ones that actually dropped the bombs. But, seeing as I’m a personal accountability guy I’ll take the blame for it. Sorry.

It’s a great blog, check it out!

Seriously…I’m wore the fuck out.

Moving on though….I am quite confident that the Chosen One, Barack Hussein Obama, the Messiah to the Liberals, Socialists, Terrorists, and of course the Gay Mafia will without a doubt fuck shit up!  I truly believe he could fuck up a wet dream.  When that happens…I will be there with bells on ready to comment and disclose the failure he will surely be.

I have not been around lately because I’ve been a little under the weather.  I should be back up and running this weekend.

The man who launched Barack Hussein Obama’s political career from his living room, not simply a man in the neigborhood, but a man that Barack Obama actually broke bread with and shared an office with planned for re-education camps and the mass murder of possibly 25 million Americans who could not be re-educated.  Wasn’t this tried by the former Soviet Union?  What about Pol Pot in Cambodia?

I brought up the subject of what’s going to happen after we take over the government. We become responsible then for administrating 250 million people … and there was no answers. No one had given any thought to economics. How are you going to clothe and feed these people? The only thing that I could get was that they expected that the Cubans, and the North Vietnamese and the Chinese and the Russians would all want to occupy different portions of the United States. They also believed that their immediate responsibility would be to protect against what they called the counter-revolution. They felt that this counter-revolution could best be guarded against by creating and establishing re-education centers in the Southwest, where we would take all of the people who needed to be re-educated into the new way of thinking and teach them how things were going to be. I asked, well what is going to happen to those people that we can’t re-educate that are die-hard capitalists? The reply was that they would have to be eliminated. When I pursued this further they estimated that they would have to eliminate 25 million people in these re-education centers. When I say eliminate, I mean kill … 25 million people.
I want you to imagine sitting in a room with 25 people, most of which have graduate degrees from Columbia and other well-known educational centers, and hear them figuring out the logistics for the elimination of 25 million people. And they were dead serious.

Educated people sitting around trying to figure out a way to eliminate 25 million people?  Jeezus H Christ, that brings back visions of Hitler’s early planning of his “Final Solution”.  Wake the hell up America.  What the hell are you going to do when you wake up one morning in 2009 and realize you voted for the most evil POS since Pol Pot, Hitler, and Stalin?

William Ayers is a terrorist.  An unrepentent mass murdering, flag stomping, cop killing peice of donkey shit that is walking the streets as a free man despite his crimes that he himself admited to.

Michelle Malkin is reporting a essay by Zombie Time about a book Bill Ayers wrote once upon a time that is essentially a blue print for Disaster.

Over the weekend, Zombie uploaded Barack Obama’s cheery book review of his neighbor’s tome on the juvenile court system.

According to Barack Obama, schmucks like Bill Ayers are nothing more then community organizer working within the community for a greater good.  ( puke )

Welcome to The Chonicles Of A Rogue Jew.

As many of my regular readers have noticed I’ve been playing around with the look and feel of my blog and I think I’ve finally come up with a new look for it and with that new look came a new name also.  I’m kicking around the idea of finding a host for the site and setting myself free of the restraints of WordPress as the blog host.  Now I just have to clear it with the missus and see what she thinks about it.

As you can tell, I customized the Header and added some feeds from two of my favorite blogs, The Jawa Report and Hot Air.  I’m just making sure the feeds don’t affect the loading of the page and in the future I may add more feeds.

Beginning Monday Sept 29, 2008 I will be setting aside my blogging duties for a couple of days because of the upcoming Jewish Holiday Rosh Hashanah   ראש השנה  which is the Jewish New Year.  I will be posting like a maniac between today and monday.  To my Jewish Readers I would like to wish you all a “L’shanah tovah tikatev v’taihatem” which in english means, “May you be inscribed and sealed for a good year.”

I love how the Democratic Messiah Barack Hussein Obama begs for the Jewish vote while a branch of his adoring supporters continues with their anti-semitic diatribes against Jews.

JERUSALEM – Jews should be “burned” and “thrown in the oven.”

The Jewish state is leading a “Holocaust” against the Palestinian people and was responsible for 9/11.

The above are just a sampling of a large volume of racist, anti-Semitic and anti-Israel propaganda that can be found on user-generated pages on Sen. Barack Obama’s official campaign website, which allows registered members to form groups and post content in online “community” blogs.

Am I surprised at this?  No, I’ve noticed the same hate generated venom from the kool aid drinking  cult members who swoon and faint at his presence.  Unfortunately, my mother is one them.  They echo the same hate rhetoric made by Obama’s pastor of 20+ years that he could no sooner disown then he could his own racist grandmother…..Till they became political liabilities and he threw them both under the bus.