Freedom….I haz it!  Fuck Obama and his koolaid slurping horde of fucknuts!  Put this in your crack pipe and smoke bitches!

I will remember fondly for years the ass whooping American Citizens are going to deliver upon the Anti American Liberal Progressive (whatever the fuck else they’re calling themselves these days) come November of this year.

Need I say anything more?

I know, this has been all over the news this week, and I’m just getting around to it.  So shoot me.

I don’t always agree with everything Ann Coulter says, but I deeply admire her courage to say what she means, and mean what she says.  Watching her make a total buffoon out of Keith Olberman has been entertaining to say the least.

Indeed, Keith is constantly lying about his nonexistent "Ivy League" education, boasting to Playboy magazine, for example: "My Ivy League education taught me how to cut corners, skim books and take an idea and write 15 pages on it, and also how to work all day at the Cornell radio station and never actually go to class."

Except Keith didn’t go to the Ivy League Cornell; he went to the Old MacDonald Cornell.

The real Cornell, the School of Arts and Sciences (average SAT: 1,325; acceptance rate: 1 in 6 applicants), is the only Ivy League school at Cornell and the only one that grants a Bachelor of Arts degree.

Keith went to an affiliated state college at Cornell, the College of Agriculture and Life Sciences (average SAT: about that of pulling guards at the University of South Carolina; acceptance rate: 1 of every 1.01 applicants).

Olbermann’s incessant lying about having an "Ivy League education" when he went to the non-Ivy League ag school at Cornell would be like a graduate of the Yale locksmithing school boasting about being a "Yale man."

What Ann Coulter does to liberal weenies like John Edwards, Barack Obama and Keith Olberman is equal to what Hulk Hogan and Bill Goldberg did to their opponents in the Pro Wrestling ring…..Total Destruction with entertainment value!

Out of boredom, I’ve watched Obama’s lapdog on his show, and not once did I ever think that he did go to college, other then perhaps dropping out from ITT Tech.  Besides Chris Matthews, Keith Olberman is the only other person I’ve seen that can talk while having his mouth filled nuts deep with Obama’s schlong.  In some circles, that could be seen as talent.

Olberman just needs to avoid paying taxes for a few years and he may then be fully qualified to hold a cabinet position…..Secretary of Agriculture.

Here is some of Coulter on Red Eye….

Go to Google.Com and type in…..

Less then 30 days into what is going to be a long 4 years and the Moonbat Messiah has already surpassed Bush as an Epic Failure!

I didn’t always agree with you, but most importantly you kept us safe by delivering the message to Islamic Terrorists that any attack on our nation would be met with all of the might of our Armed Forces and  superior firepower.  You had faith in us as a nation, faith in Freedom, and despite strong opposition from a fanatical Liberal Left, you stood your ground.  You put country before yourself.  For that I am grateful.

For your tax cuts by entrusting the American people to decide what to do with their own money rather then giving it to government to decide, my wallet and my wife thanks you.

And mostly for being a great friend to the Jewish State of Israel and Jews everywhere.  Your ideas for peace in Israel were not the greatest, but your heart was in the right place.

Throughout your presidency, Americans have saw a man with unfailing modesty, strong character, decency, moral clarity and class. He was as consistently gracious to his critics as they were consistently rude and full of hatred. He never wavered in distinguishing good from evil and freedom from tyranny, or, as he explained in his second inaugural, “the moral choice between oppression, which is always wrong, and freedom, which is eternally right.”

When the new year arrived on Jan 1, 2009, President Bush said to the nation, “As my time in office comes to a close, I thank the American people for trusting me with the honor of serving our great country. It has been a tremendous privilege.”

For these things and many more Mr. President, you have my heartfelt gratitude.  May G-d bless you and your family President Bush.

Not sure if this is going to piss off some people or not, but what the hell, ya never know unless ya try.

I’m trying to shake things up a bit here at the Rogue Jew.  I’m working on adding a contributing author to the site, and although I will continue my with my foul mouthed ways of pointing out just simply how bad Barack Obama is for America at the same time I’m going allow my pig side to show from time to time and feature a smoking hot Right Wing Babe every month.

Right Wing News blogger Cassy Fiano who delivers “Smokin Hot Commentary” every day on her own and several other blog is sure turning up the heat herself, especially on this cold ass Michigan winter day.  The edgy and very bony Ann Coulter has nothing on this Right Wing Hottie, after all, I believe the saying is, “Bones are for Dogs, and Meat is for man”.

Babes With Guns get my attention every single time!

In the pic below, Even the kid she’s holding is making it a point to remind us of that nice rack!

My name is Cassy Fiano, and I’m a twenty-something Florida native who started blogging solely on a whim. I blog here, as well as for Wizbang, Stop the ACLU, and as a weekend blogger at Right Wing News. I am not married, and have no children. I do, however, have a baby sister who is twenty-three years younger than I am. 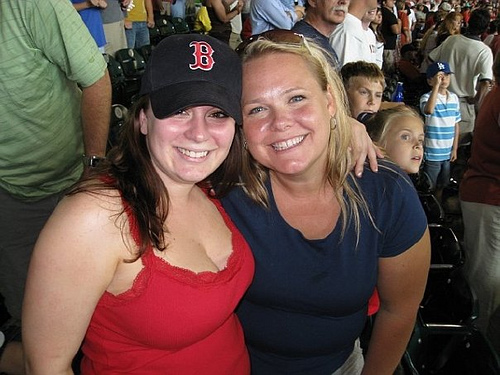 You don’t even have to tell me, I know it already and my wife points it out to me on a regular basis…..I’m a pig!  But jeez it’s just so much fun being me!

Check her stuff out at Cassy Fiano,  Right Wing News, Wizbang, and Stop the ACLU. Not only is she easy on the eyes, but a very intelligent and talented writer.  Not sure if she’s part of the tribe or if it’s a severe case of Shicksappeal, but whatever it is,  I’m sold!

Error: Twitter did not respond. Please wait a few minutes and refresh this page.