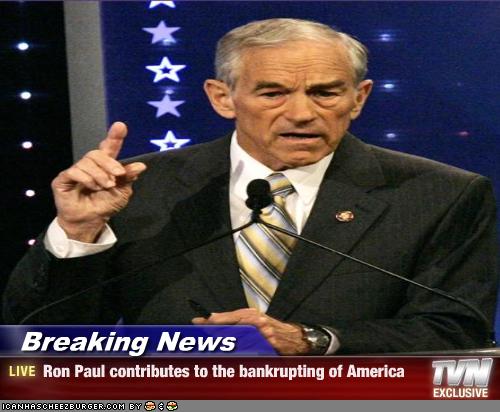 Mr. Small government Ron Paul is the GOP’s biggest Porker when it comes to earmark spending and after all of his screaming about smaller government he is nothing more then a hypocrite no different then Obama, Reid, Murtha, or Pelosi.  Nothing more then a RINO as I long suspected he was.

1) He is one of the biggest yellers about small government. I certainly don’t begrudge him that but…

2) Does such a yeller need to be the top Republican porker? Can’t he satisfy himself with being, say, in the middle third of earmarkers?

3) It’s disappointing, because I’ve been told he’s the Only Man Who Can Save America.

The Texas congressman who is the darling of the Libertarian Right, has more earmarks in the pork-laden $410-billion spending bill than any other Republican.

That’s not according to the MSM, or the liberal blogosphere. That’s what Fox News is reporting.

In an interview Tuesday  night with Fox News’ Neil Cavuto, Paul not only defended his own earmarks, he argued that every penny in the federal budget should be earmarked, to improve transparency.

I wonder if any of the earmarks for America’s Krazy Unkkkle was to payback the White Supremacists that supported him during his run for President?