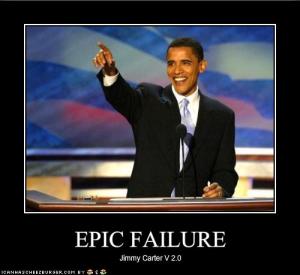 The numbers are in folks and even the Koolaid Slurpers at CBS are confirming it….Barack Hussein Obama as President of the United States is a unprecedented and epic failure!

Energy and the Environment

Surrounded by corrupt and incompetant people who are advising him. He may be a brilliant speaker with a teleprompter but is a stuttering idiot when speaking off the cuff.   The man does not have the ability or experience to govern.

I have witnessed Presidents come and go in my 44 yrs  and he is by far the worst I have seen, worse then Carter and I remember what a cowardly schmuck he was.

He is allowing assholes like Harry Reid and Nancy Pelosi to govern our country while he runs around the world making a mockery of the United States bowing, apologizing and making himself and America look weak.  He is out of touch with the Majority of Citizens in this country and has no respect for our Nation, it’s beliefs and our Flag.

Go to Google.Com and type in…..

Less then 30 days into what is going to be a long 4 years and the Moonbat Messiah has already surpassed Bush as an Epic Failure!