I cannot begin to express how I feel tonight.  A war hero lost to a community organizer who pals around with Terrorists and Racists.  There is only one thing left to say…..

We as a nation are FUCKED!

The only good thing to come out of this is the fact that medical Marijuana became legal here in the state of Michigan.  I think I’m going to be needing some to get thru the next four years of redistribution of my earnings and living in a facist state.

Good news for Jimmy Carter though….In all likelyhood, Barack Obama will probably replace him as the most failed President in American history.

Well hang on to your wallets, crack open a beer and spark up a fatty…..it’s going to be long and expensive four years!

All Hail the Chosen One….. 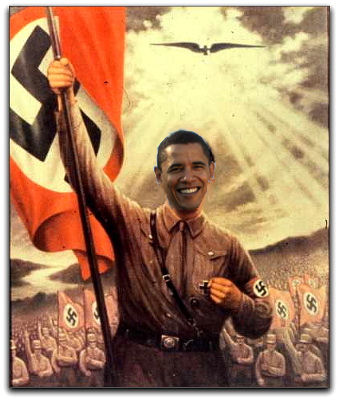 Are we really surprised about this?  In a 2001 interview on Chicago Public Radio, wannabe Dictator Barack Obama came out strongly in favor of the “redistribution of wealth.”  And that is a direct quote of Obama himself, I guess you could say it’s straight from the ass’ mouth.

“You know, if you look at the victories and failures of the Civil Rights movement, and its litigation strategy in the court, I think where it succeeded was to vest formal rights in previously dispossessed peoples. So that I would now have the right to vote, I would now be able to sit at a lunch counter and order and as long as I could pay for it, I’d be okay, but the Supreme Court never entered into the issues of re-distribution of wealth, and sort of more basic issues of political and economic justice in this society.

“And that hasn’t shifted, and one of the, I think, the tragedies of the Civil Rights movement was because the Civil Rights movement became so court-focused, uh, I think that there was a tendency to lose track of the political and community organizing and activities on the ground that are able to put together the actual coalitions of power through which you bring about redistributive change. And in some ways we still suffer from that.”

A caller then helpfully asks:

“The gentleman made the point that the Warren Court wasn’t terribly radical. My question is (with economic changes)… my question is, is it too late for that kind of reparative work, economically, and is that the appropriate place for reparative economic work to change place?”

“You know, I’m not optimistic about bringing about major redistributive change through the courts. The institution just isn’t structured that way. [snip] You start getting into all sorts of separation of powers issues, you know, in terms of the court monitoring or engaging in a process that essentially is administrative and takes a lot of time. You know, the court is just not very good at it, and politically, it’s just very hard to legitimize opinions from the court in that regard.

So I think that, although you can craft theoretical justifications for it, legally, you know, I think any three of us sitting here could come up with a rationale for bringing about economic change through the courts.”

“And uh, to that extent, as radical as I think people tried to characterize the Warren Court, it wasn’t that radical. It didn’t break free from the essential constraints that were placed by the Founding Fathers in the Constitution – at least as it’s been interpreted, and Warren Court interpreted it in the same way, that generally the Constitution is a charter of negative liberties: [it] says what the states can’t do to you, says what the federal government can’t do to you, but it doesn’t say what the federal government or the state government must do on your behalf.

Holy Obama H Christ!  How in G-d’s name did this schmuck end up on any ballot here in the United States?  Should’nt he be in Zimbabwe shadowing Mugabe to follow in his footsteps someday?  If this putz is elected, this will certainly be the last free election I will probably see in my lifetime given the amount of fraud perpetrated by the Obama campaign.  From Credit card Donation scams, Credit Card Phishing, and blatant voter fraud, Obama will overtake Bill Clinton as the most scandalous President in American History.

The Obamessiah’s running mate Joe Biden said it himself.  Maybe not in those words, but I can assure you, that’s what I took out of the statement that within 6 months, something bad is going to happen to test the Messiah….

Now if you were to hear what Joe Biden had to say about Barack Obama and John McCain during the Primary Race, you should come to the conclusion that under Barack Obama, you’re fucked and with President John McCain you’re much safer under a more prepared leader who Joe Biden himself said he would run WITH against the incompetent and unprepared Barack Obama.

Just listen for yourself…….

Even Joe Biden Says In 6 months we are so FUCKED!

***Warning*** Intended for Mature Audiences Only. May contain adult language and sexual references.  Reader Discretion is Advised!
“I’m The Rogue Jew and I approve of this message!”
You know something? I’m pissed right the fuck off tonight.  I am sick and fucking tired of being told what I can and cannot say about this schmuck running for President.  The egomaniacal messiah of the Democratic Party.  The Media have spent more time investigating a fucking plumber then they have that Prick Obama.  G-d forbid you speak out against Obama.  After what some people have seen what the MSM did to Joe the Plumber, they are now afraid to come out of hiding to speak the truth about Obama’s relationship with Ayers the Terrorist.

Fuck em!  Obama, Biden, Dean, Billary Clinton, and all the rest of the Kool Aid drinking cult of assholes can line up and kiss my fat hairy ass. Tonight I am so fucking pissed off I can hardly breath.  McCain, where is the Maverick?  Why are you not kicking Obama’s ass back to the turd world country he came back here from?  Quit being such a nice guy.  My past experience tells me nice guys finish last and assholes finish with time to spare.  Time to strap your nuts on and spend this last two weeks pounding Obama’s punk ass into a puddle of piss, shit, snot and blood, and if the bitch gets back up, then put him back on the mat.
Who gives a flying fuck what the MSM says.  I know, I know…They’ll say your a racist….They are going to say that anyway.  That’s the only thing he’s got to run on.  I could give two shits what race he is, who the fuck cares, white, black, yellow, purple….From where I sit, his color is Commie Fucking Red and that’s the only color I see in this election.  I’m a Jew and I did’nt vote for that liberal Prick Lieberman when he ran with dumbass Al Gore, so race or religion doesn’t mean squat shit to me when it comes to choosing a leader.  I want someone with some big fucking balls and an itchy trigger finger who falls asleep at night with his fucking finger on the button. 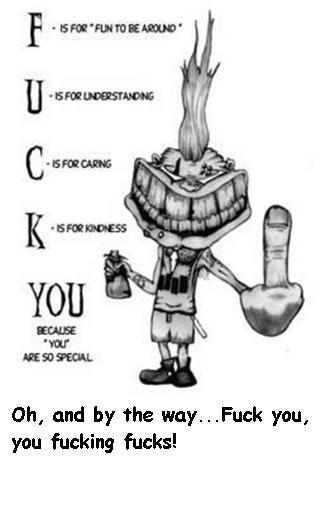 I know what your all saying…Why the foul language?  I’m sick to fucking death of the hopey changey nicey nice crap.  I gave blood, sweat, and snot to the Michigan of Dept of Corrections for over ten years.  I graduated with a PhD in four letter words.  The word “Fuck” was used as a comma in most cases.  I haven’t gone off on a four letter rant in so long it really feels good to get it off my chest.  So I figure before the Feuhrer goes off and makes it illegal to use his name in vain, I figureed I’d give that Penis with Ears a good verbal fist fuck for him and his cult of schmucks to remember me by while their slurping the koolaid he pisses forth unto the masses.
I personally wish they’d take Barack Obama, Hillary Clinton, Ted Kennedy and Howard Dean. Tie all of them pricks to their chairs and make em stare at Helen Thomas till that bitch uglies that whole bunch to death!
On that happy note, I think I’m going to go to bed now.  I will need all the sleep I can get to pay for Obama to spread my wealth around and hand over my hard earned dollars to the baby making cum guzzeling crack whores and their pimps/dealer……Fuck, I’m tired!

We are so fucked!

This message has been brought to you by the letter Fuck and the number You!