Need I say anything more?

This Weekends Poll: Who would you like to see win the nomination for the GOP in 2012?

In an interview with CNN this summer, Forester did not hide her distaste for eventual Democratic presidential nominee Barack Obama.

“This is a hard decision for me personally because frankly I don’t like him,” she said of Obama in an interview with CNN’s Joe Johns. “I feel like he is an elitist. I feel like he has not given me reason to trust him.”

Forester is the CEO of EL Rothschild, a holding company with businesses around the world. She is married to international banker Sir Evelyn de Rothschild. Forester is a member of the DNC’s Democrats Abroad chapter and splits her time living in London and New York.

Personally, I could think of a thousand and one reasons not to trust Obama.  His ties to Terrorists and Middle Eastern Criminals, his undermining of Foreign Policy in a War Zone, his relationship with a Racist Preacher, and the list goes on and on.

With Obama I see no change.  He is spewing Democratic Talking points from the Jimmy Carter era and we all know how that ended….Huge disaster!

Obama is a liar, corrupt, two faced elitist. ENOUGH IS ENOUGH. The two big economic problems in this country are a result of liberal/democratic policies that Obama is part of it. We need to DRILL and get back to nuclear and alternative sources of energy as well as to maintain a stable political system in the countries that supply our oil needs, exactly what Obama is not, and guess who blocked all attempts to regulate Fannie/Fred, the democrats, Cristopher Dodd, and guess who got political bribes from Fannie/Fred, the democrats, and ahead of the line OBAMA, and guess who is one of Obama main economic advisors is , the CEO of Fannie/Fred who also led the VP selection effort. WE CAN NOT Afford more of the SAME crooked politics , we need Honor, trust, and Experience in the white house. and Obama is none of the above.

While Democrats are attacking Gov. Sarah Palin while chowing down on Arugula at a $28,500 a seat Barbara Streisand Dinner Show to support the Chosen One, Future President John McCain is attacking the issues head on with this new campaign video.

Personally, I think McCain needs to emphasize the corruption of the Democratic run Congress and their part in the ailing economy seeing it was Democrats that were benefiting the most from the Banks that have recently been bailed out by the Government, ie Fannie Mae and Freddie Mac.

Besides his Messianic complex and an ego that goes beyond that of a Rock Star, Barack Hussein Obama seems in all likely hood a cult leader like those before him, Jim Jones and David Koresh an individual who is on the path of self destruction.  One only wonders if his disciples and followers will drink the kool aid or prepare themselves for the mothership awaiting them behind a far a way planet or a remote comet.

DENVER – Senator Barack Obama’s acceptance speech last week seemed vastly different from the stands of this city’s Invesco Stadium than it did to the 40 million who saw it on television. Melancholy hung like thick smog over the reserved seats where I sat with Democratic Party staffers. The crowd, of course, cheered mechanically at the tag lines, flourished placards, and even rose for the obligatory wave around the stadium. But its mood was sour. The air carried the acrid smell of defeat, and the crowd took shallow breaths. Even the appearance of R&B great Stevie Wonder failed to get the blood pumping.

Obama, in short, is long on brains and short on guts. A Shibboleth of American politics holds that different tactics are required to win the party primaries as opposed to the general election, that is, by pandering to fringe groups with disproportionate influence in the primaries. But Obama did not compromise himself with extreme positions. He did not have to, for younger voters who greeted him with near-religious fervor did not require that he take any position other than his promise to change everything. Obama could have allied with the old guard, through an Obama-Clinton ticket, or he could have rejected the old guard by choosing the closest thing the Democrats had to a Sarah Palin. But fear paralyzed him, and he did neither.

In my February 26 profile, I called Obama “the political equivalent of a sociopath”, without any derogatory intent. A sociopath seeks the empathy of all around him while empathizing with no one. Obama has an almost magical ability to gain the confidence of those around him. Perhaps it was the adaptation of a bright and sensitive young boy who was abandoned by three parents – his Kenyan father Barack Obama Sr, who left his pregnant young bride; his Indonesian stepfather Lolo Soetero; and by his mother, Ann Dunham, who sent 10-year-old Obama to live with her parents while she pursued her career as an anthropologist.

Combine a child’s response to serial abandonment with the perspective of an outsider, and Obama became an alien species against which American politics had no natural defenses. He is a Third World anthropologist profiling Americans, in but not of the American system. No country’s politics depends more openly on friendships than America’s, yet Obama has not a single real friend, for he rose so fast that all his acquaintances become rungs on the ladder of his ascent. One human relationship crowds the others out of his life, his marriage to Michelle, a strong, assertive and very angry woman.

If Novak’s report is accurate, then Michelle’s anger will have lost the election for Obama, as Achilles’ anger nearly killed the Greek cause in the Trojan War. But the responsibility rests not with Michelle, but with Obama. Obama’s failure of nerve at the cusp of his success is consistent with my profile of the candidate, in which I predicted that he would self-destruct. It’s happening faster than I expected. As I wrote last February:

It is conceivable that Barack Obama, if elected, will destroy himself before he destroys the country. Hatred is a toxic diet even for someone with as strong a stomach as Obama … Both Obama and the American public should be very careful of what they wish for. As the horrible example of Obama’s father shows, there is nothing worse for an embittered outsider manipulating the system from within than to achieve his goals.

By all rights, the Democrats should win this election. They will lose, I predict, because of the flawed character of their candidate.

All in all, the American public is just beginning to see the “Real Obama”.  The Leftist Liberal thug, and an empty headed empty suit that makes empty promises with no record to stand on, and who has friendly associations with criminals and terrorists and has been bought and paid for by George Soros.

Obama promised “CHANGE”.  That change has come to us in the form of a re-energized Republican party and the “HOPE” of the Conservatives that made the GOP great!  Obama thought he was going up a demoralized party that had lost all hope and he was hoping that we would all stay home in November or go the third party route.  He was WRONG!

I’ve always said…It doesn’t matter how much lipstick you put on a pig….It’s still a pig!

Does Obama really want to go toe to toe against Sarah Palin when it comes to leadership?

She’s all that and a bag of chips!

She’s easy on the eyes and hot as hell…..

Unlike The Chosen One, Barack Hussein Obama, she visits injured soldiers…. 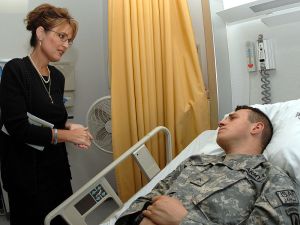 She’s got my vote in November!!!

Baby got back, and President Bush has game! 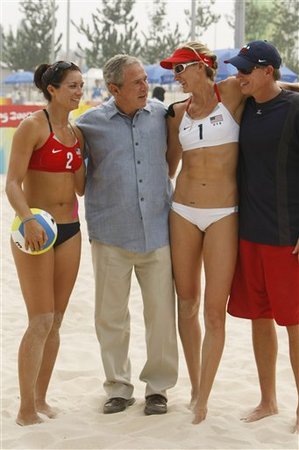 Can you say, Executive Privilege?

Is that all you? 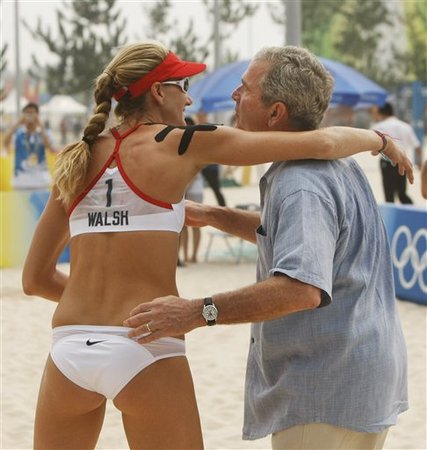 In the words of Austin Powers….”Yeah Baby!”

This was sent to me in an email…Author unknown

O.K. Now you have sat on your hands and OIL has hit $120 a barrel. We the people have been telling you ALL that we need to drill and refine OUR OWN OIL. We have been nice to you and believed you will use common sense and open the land so we could get foreign oil off the back of America. You are giving our tax money to alternative energy and, DUMMY’S, you are raising the cost of FOOD !!! I can no longer have respect for any one of you.. I must vent my disappointment in ALL elected politicians, YOU ARE DRIVING THIS COUNTRY INTO BANKRUPTCY, Creating hatred and discus of CONGRESS AND THE PRESIDENCY, Have the EPA slowdown on the alternative energy push until we get out from under this oil mess. Fine, I agree we need alternative energy but not at the expense of driving the country into the ground… We don’t  need 50 of 100 different companies trying to develop alternative energy , we need YOU IDIOTS to consolidate research, and find the answer, after all we build a bomb in he 40’s when we put all the energy of research into ONE RESEARCH program.. USE YOUR HEAD OR GET OUT AND LET SOMEONE TAKE YOUR PLACE WHO WILL PUT AMERICA FIRST…Give up your free vehicles, your free perks, your cheep insurance, and your ridicules pay, cut your wages to the poverty level, pay your own health insurance, buy your own gas, and pay taxes, to cities, counties, state, IRS, and sales tax on everything.. OH and by the way, your pension will be deflated by a worthless dollar. THANKS FOR NOTHING.