From the Herald Sun:

A 2008 federal law banned the storage of fertilised human eggs due to religion-based concerns over “mixing in the lineage” between families, the English-language Khaleej Times said.

Eggs can be fertilised outside the womb during IVF, which produces excess fertilised eggs that can be frozen for future use.

An estimated 5000 fertilised eggs are stored at the state-owned Dubai Gynaecology and Fertility Centre, the only centre in the Gulf state allowed to perform IVF, Khaleej Times said.

Another 5000 fertilised eggs are believed to be stored at Al Tawam Hospital in Al Ain, around 150km south-east of the Emirati capital of Abu Dhabi, the paper said.

A FERTILITY clinic in Dubai will next week dispose of about 5000 human embryos on religious grounds.

No wonder the liberal democrats love these guys so much….Muslims place the same value on life as do Democrats.  This would fit right in with Chairman Obama’s Health Care  plan.

The enemy within is striking at our brave men and women of the US Military.  First we have Army Major Hassan shooting 13 people at Ft Hood, now this shit….

CBN News has learned exclusively that five Muslim soldiers at Fort Jackson in South Carolina were questioned just before Christmas. It is unclear whether the men are still in custody. The five were part of the Arabic Translation program at the base.

Prior to this posting, CBN News learned that these details were also confirmed by a government official with knowledge of the investigation.

The men are suspected of trying to poison the food supply at Fort Jackson.

A source with intimate knowledge of the investigation, which is ongoing, told CBN News investigators suspect the “Fort Jackson Five” may have been in contact with the group of five Washington, D.C., area Muslims that traveled to Pakistan to wage jihad against U.S. troops in December. That group was arrested by Pakistani authorities, also just before Christmas.

Coming as it does on the heels of November’s Fort Hood jihadist massacre, this news could have major implications..

Are we starting to see a theme here yet?  These five people suspected of poisoning US Troops are not Christian, Jewish or Catholic….

The young Arab was an Allah’s warrior against the US troops in Iraq, before he converted into Christianity and fled to Switzerland. He warns other Muslims not to murder in the name of Islam.

The ex-Muslim who calls himself Sultan should stay quiet, because that would be safer for him and he would not have to fear for his life. But he decided to speak out, and now he is sitting in a cafe in Zurich telling his story.

He is a young Arab with a thick black hair, brow eyes continuously observing his surrounding, a feature that made him a good Muslim terrorist.

Sultan’s story began ten years ago for a fight for his homeland in the Middle East, where the US was fighting the Muslim terror organization. It is a story resembling many young Muslim terrorists, who all wanted to enter the paradise and the receive 72 virgins.

And, it is a story of radical change.

When Sultan met his friends, members of the Islamic Brotherhood, he was a 16-year-old Muslim from traditional family, and not terribly religious. The Muslim boy enjoyed the cohesion is the Muslim group, its ideas and the radical Muslim rhetoric.

Good Muslims are intended to kill infidels as the Koran says; that is the only way to paradise and the 72 virgins.

Click on the above link to read the entire story.  If only more like him spoke out against the Religion of Blown To Pieces….

We all know what happened this week at Fort Hood.  Despite our State run Media sticking their heads in the sand, we all know what it was….It was an act of Islamic Terrorism plain and simple.  I don’t care what you say about the mental status or lack thereof in the mind of Major Nidal Malik Hasan, the fact remains he is a Major in the US military who is Muslim and decided to carry out an act of Terrorism based on the fundamental beliefs of his religion. 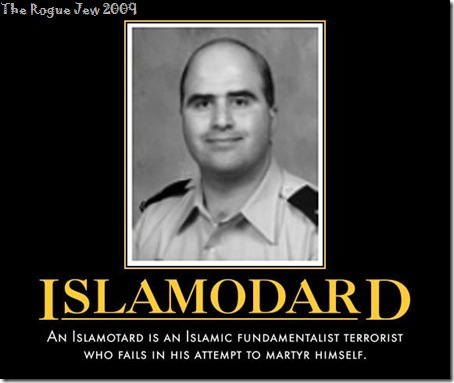 Thanks to a brave female cop, this asswipe was eliminated from the equation with extreme prejudice but at the same time, he was DENIED access to the 72 virgins promised to him by the Cartoon like Prophet Muhammad.  Instead, the Islamotard in the vegetative state will lie paralyzed in a Prison hospital bed while a cockstrong faggot teabags his nuts across Nidal’s nose for the rest of his life.

Was the Chairman’s teleprompter there to tell him what to say? 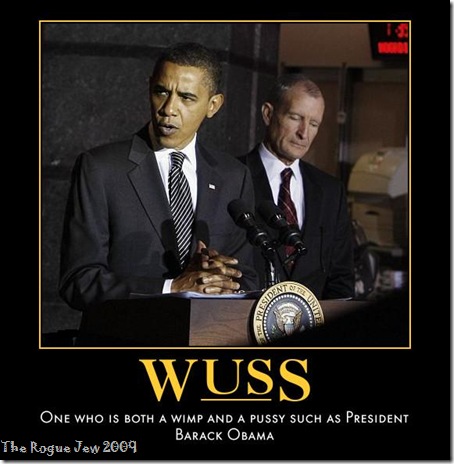 President Barack Obama speaks to employees at the National Counterterrorism Centre yesterday. Later he spoke to members of Congress about strategy in Afghanistan

Islamic Terror Organization Hamas is happy that the Moonbat Messiah, Barack Hussein Obama is rewarding their hard work in his campaign with a chunk of the Bailout funds to the tune of $900 Million Dollars.

TEL AVIV, Israel – Hamas is "very happy" with a pledge this week from the Obama administration to provide $900 million in aid for rebuilding the Hamas-controlled Gaza Strip, a spokesman from the Islamist organization told WND.

"We are very happy with this decision," said Hamas spokesman Fawzi Barhoum, speaking by cell phone from Gaza. "In the first place, this money will go toward reconstructing efforts."

Barhoum said he expects the money to be tightly controlled. He said the funds are likely to be delineated to the Palestinian Authority and to the United Nations Relief and Work Agency, or UNWRA, which administers aid to millions of Palestinian "refugees" in the Gaza Strip and West Bank.

Hamas has a close relationship with UNWRA; the agency openly employs a large number of Hamas members, including some of the group’s most senior terrorists.

The Islamic Terror group openly endorsed Obama for President and even had set up phone banks in Gaza to make campaign calls in America and was rumored to have funded the Obama campaign with illegal donations thanks to Obama’s lax security of his website which allowed for anyone to donate funds secretly. 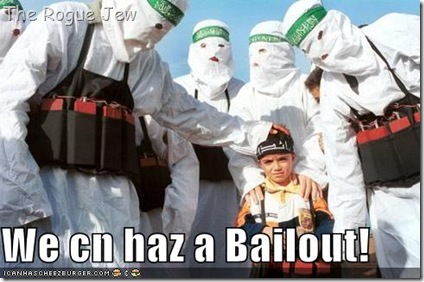 Did you ever imagine the day when the American government would begin funding the killing of Jews?  Hitler must be laughing his ass off right about now at this ironic turn of events.

Our economy is in the shitter, and Dear Leader promises our money to mass murdering lunatics who use children as human shields.  Looks like Obama is fighting a proxy war against the Jewish State of Israel…Rev. Jeremiah Wright must be so proud.

The Religion of Blown to Peices has assembled a list of members of the media who they have labled “Smearcasters” and are dubbed “Islamophobia’s Dirty Dozen.”

There are some heavy hitters have been named to this Rogues Gallery.  Bill O’Reilly, Michelle Malkin, Sean Hannity, Glen Beck, and Michael Savage to name a few.

The terror apologists at FAIR (fellow travelers with CAIR) have published a report on “smearcasters” whom they have dubbed “Islamophobia’s Dirty Dozen.”

Yes, I made the list — along with many other outspoken critics whom I’ve learned much from and greatly admire. I consider it a Badge of Honor. Here’s one of my quotes on this blog that FAIR singled out as hateful:

I stopped using the terms “Islamic fascist” and “Islamofascism” a while ago…because they obscure rather than clarify. The views held by the Muslim jihadis who want to destroy us are not marginal views held only by a minority of “Islamic fascists.”

I am jealous that I’m just a small time blogger that was unable to make the list.  Lord knows I have made an effort to make such a list.  Maybe someday.

Here is the official spokesman for Islamic Outrage:

In a demonstration to show that they are not bloodthirsty lunatics, more then 25,000 muslims turned out in a protest calling for the blood and head of Geert Wilders, the maker of the smash movie FITNA.

KARACHI, Pakistan —  More than 25,000 people rallied Sunday in the largest protest in Pakistan so far against an anti-Koran film made by a Dutch lawmaker, urging their government to expel the Netherlands ambassador.

“They call this freedom of expression, but it’s freedom of aggression,” keynote speaker Munawwar Hasan, a leader of the main Islamic party Jamat-e-Islami, told the crowd as it chanted “God is great.”

The 15-minute film by Geert Wilders, which sets verses from the Muslim holy book against a background of violent images from terror attacks, was released in March. It has sparked weekly protests in Pakistan, usually drawing hundreds of people after prayers on Friday, the Muslim holy day. But police officer Syed Suleman estimated Sunday’s crowd at 25,000, while organizers claimed more than 100,000 people turned out.

Wearing head bands inscribed “We are ready to sacrifice our lives for the sanctity of the prophet,” they marched for two kilometers (more than a mile), then gathered on Karachi’s main street to listen to speeches.

But remember, they are “Peaceful People” according to the media.

But we’ll just stand back and await the arrival of our new overlords because after all, they are peaceful people who mean us no harm, right?

BAGHDAD (AP) – The body of a Chaldean Catholic archbishop kidnapped in Iraq last month was found just outside the northern city of Mosul, officials said Thursday. Archbishop Paulos Faraj Rahho was seized by gunmen in Mosul soon after he left Mass on Feb. 29. Three of his companions were killed, the latest in what church members called a series of attacks against Iraq’s small Christian community.

Monsignor Shlemon Warduni, the auxiliary bishop of Baghdad, said the church in Mosul had received a phone call from the kidnappers on Wednesday telling them the archbishop was dead. They also told church officials where they could find the body.

“We are hurt by this painful incident,” Warduni told The Associated Press.

A Mosul police officer and morgue official said Rahho’s body was found just outside the city.